A Love Letter to the Calderon 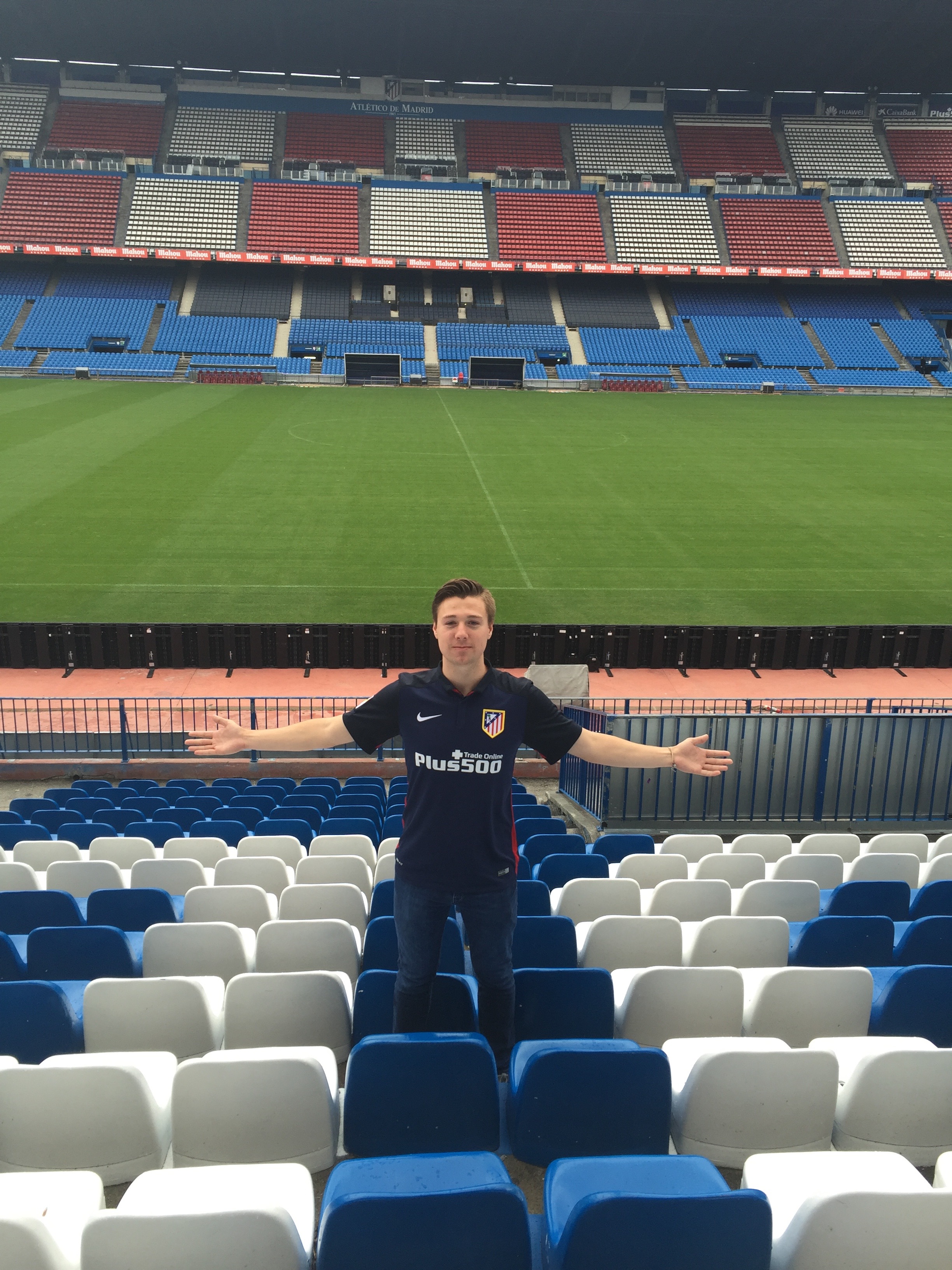 When I studied abroad in Spain, my group had about 15 other people in it, and pretty much all of the people with me didn’t care too much about football, or knew anything about the game.  I was able to somehow convince a group of them to go with me during our free time to visit the stadiums of both Real and Atletico Madrid, an undoubtedly exciting experience for myself, and apparently I was exciting enough for a group of these people to come with me. Both stadiums were stunning in person; I’m pretty sure I smiled throughout both tours, and might’ve made myself look silly to my friends that went with me. Once we finished the tours, it was surprising to me which one stood out to my friends and myself. Almost unanimously, the group preferred the visit to the Estadio Vicente Calderon over the Santiago Bernebeu.

This was my opinion too, but I asked myself why my study abroad group and myself felt that way. This isn’t to say anything negative about the Santiago Bernebeu; it’s one of the great cathedrals of the game. Real Madrid has filled up their trophy cabinet, and visiting the home of Cristiano Ronaldo and Gareth Bale drew more “oohs” and “ahhs” than their blue and red neighbors across the city. Walking around the Bernebeu was a pilgrimage, and something I will never forget. When you turn the corner into the main part of Real Madrid’s trophy room, you are greeted with low lights and golden confetti shooting up all around you in the walls. Sitting directly in the middle of the gold confetti, is an under lit box that takes up the whole room with all twelve of Real Madrid’s Champions League trophies. It takes your breath away. Real Madrid doesn’t do understated in any sense of the word.

I was unfamiliar with how to get around the city of Madrid, and when we got off the subway station to get to the Calderon, the stadium isn’t right there once you exit the underground, so we had no idea where to go. There was a man walking the other way wearing an Atletico hat, so I asked him in broken Spanish how to get to the stadium. He first laughed, probably at my terrible attempt at an accent, then actually walked with us to where we were in eyesight of the stadium. The stadium was truly in a neighborhood, and the environment around the Calderon felt like you were going to a community’s pride and joy. When my group entered the stadium, the stadium workers talked to us in English, and actually took the time to explain to my non-football watching friends, what makes Atletico special to then, and they each took turns telling stories of Fernando Torres, Diego Costa, and Diego Simeone as favorites of theirs to watch. It was a small gesture, but one that I think really symbolizes the mentality of the Atletico faithful, and that mentality was steeped in the breath that came from the Calderon’s striped seats.

Every stadium has it’s own personality. It’s a two-way relationship with the fans to create the atmosphere that’s inside for every match, and even when all the fans have left the stadium. Personally for me, this relationship came in full effect with the creation of Atlanta United over the past few years. When the Five Stripes started playing during their inaugural season, their brand new stadium wasn’t finished yet, so they settled for a smaller stadium that was in the heart of the city, Bobby Dodd Stadium. It was not state of the art by any means, with the field first being laid in 1913, but the confines of the stadium meant that character from the stadium translated to the fans to create one of the best fan cultures in the United States. When you’re three feet away from the players you’re watching, then the excitement grows. No sound got lost. When Atlanta made the transition into their new stadium, the fan culture had that gritty experience under their belts to carry with them. Now they’re packing the highest attendance in MLS.

The Calderon was an older stadium too, and it was home to the Atletico fans.  When you walked around seeing the red, white and blue plastered all over the stadiums seating, each row exuded pride for itself. There’s a circular loop usually between fans and their stadium. The fan identity feeds into the stadium’s personification, which then feeds back into the fans to give them their voice. It’s a stabilizer, a constant reminder of a club’s values. There was a fan that said on the Calderon’s last day, “This was supposed to be a day of celebration, but I think the sadness is starting to kick in. Everyone is devastated with the feeling that we are leaving this neighborhood forever.” It wasn’t just about leaving the Calderon. It was about leaving the NEIGBORHOOD too.  There was an intangible feeling of home around the whole stadium for Atletico fans. Maybe it was time for change, but change is always hard. The Vicente Calderon had seen 80% of Atletico Madrid’s trophies, a staggering amount for any club. The Calderon saw Atletico first rise from the shadows of their royal rivals at the original Metropolitano in the late 1940’s, but they didn’t experience a run of success until the early 1970’s, when they clinched La Liga title in 1973. Juan Carlos Lorenzo, Atletico’s manager at the time, believed in discipline and disrupting their opponents, and while this went against the traditional Spainish way of thinking, it worked. You would be hard pressed to find many differences between the managerial styles of Lorenzo and Simeone, bringing the Calderon’s major successes full circle.

After my group looked at the dressing rooms for Atletico Madrid, and I had my freak-out moments from looking at Antoine Griezmann and Saul’s lockers, we were led down the tunnel and told to stop. Once we did, we walked out onto the pitch, with the Atletico song playing in the tunnel and one of my friends called it, “a beautiful experience” despite not even knowing Atletico Madrid was a team just a week before. It’s fascinating to me how poignant the intangibles of a place can be. The ghosts from games past still lingered around the corner flags, and you could hear the fans even with empty seats. Memories of goals from the Fernando Torres of old, and Griezmann of new filled my eyes as I pictured them in front of goal, and it all seemed so real. Looking at the corners and stands, it felt like I had seen it all before. There was comfort in those seats.

It’s fitting to me that a Simeone team was the last one to mesmerize Los Colchoneros; they perfectly modeled the working class aura that Atletico Madrid has held for their history as a club. Their dogged and rugged persona was a stark contrast of their Galactico foes across town, and they like it that way. Players like Coke, Juanfran, Gabi, and Diego Costa were perfect players for the fans to cheer on as the Calderon gave its final breaths. A league title in 2014 was a crowning achievement in those final few years, one that the Calderon deserved. Before the move, The rojiblancos were able to smile and celebrate at their old home.

The Wanda Metropolitano is undoubtedly a fantastic stadium. Looking at pictures and videos of the ground, it looks majestic and it fits the mold of what a modern superclub is looking for. I’ve only heard good things about it. But when I was watching Atletico Madrid play Athletic Club, I just missed the feel of the Calderon. I’m sure over time, as the years go by, the Wanda will be filled with its own history, its own ghosts will take shape with Griezmann, Carrasco, Saul, and the future players to wear the Atletico crest. Whatever personality the Wanda will take on, it will always be different than what the Calderon boasted. Maybe this will truly signify the switch from Atletico Madrid, the working class team, to Atletico Madrid, the superclub.

The Calderon wasn’t perfect, but it was one of Europe’s best stadiums. It left a huge impact on me just by taking a simple tour, and it left my friends chanting, “Aupa Atleti!” as we exited the stadium. The stadium felt like a living, breathing entity. It left a mark on me in a way that the Bernebeu couldn’t, and didn’t have much interest in either. I know my wistful feelings for the Calderon are quite in vain, and it isn’t even that I necessarily want it back over the Wanda. Halting progress is futile, and Atletico Madrid’s move to their new home wasn’t a bad move in any sense. For all of it’s quirks, like the major highway running underneath the stadium, the Calderon was just a great stadium and a great home for Atletico Madrid, and I miss it.