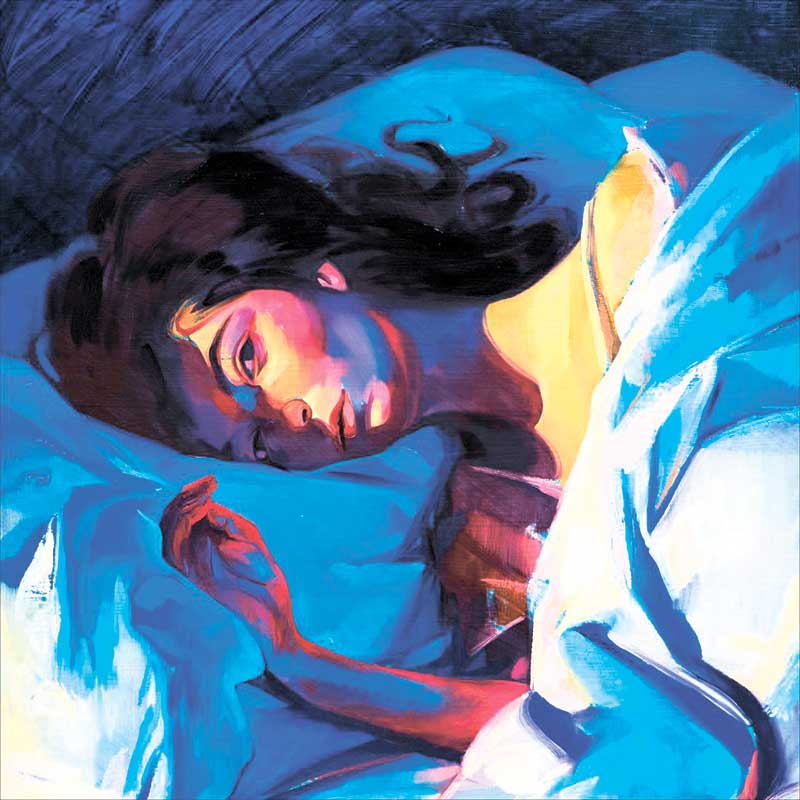 Any work of art can be appreciated for multiple facets, but one thing that is almost universally praised across the board, whether it’s a painting, a story, or a song, is its depth. When you stare at a Van Gogh, Hopper, or Monet, their paintings seem to exist beyond the canvas they sit in; each one is a world in its own right. When you look at the cover of the album Melodrama by Lorde, the portrait of Ella Yelich-O’Connor sprawled on the bed as morning light hits her face, is a work of art by 32-year-old artist, Sam McKinniss. At first glance it looks like it could belong in a museum with the portrait’s style. No words are present on the album cover to focus your attention on the work of art at hand. It’s a beautiful representation of the album that’s about to enter your ears, and the album even found its way to the Louvre, in reference to the song “The Louvre,” not looking out of place at all.

There’s a depth to the album cover, and that depth is obvious in the music as well. This shouldn’t surprise listeners of Lorde, her first album was littered with symbolism, allusion, and themes that found their way into multiple songs which creates almost a story-like feeling for the duration of the album. There even seems to be a plot to the album, growth from start to finish with the first lines of the album being, “Don’t you think that it’s boring how people talk?” from the song, “Tennis Court”, and the last words being, “Let them talk.” as ambiance from a restaurant or other crowded place finishes out the album on the song, “A World Alone”. She also has a strong emphasis on teeth that wasn’t just prevalent on her first album, with four mentions of teeth, but carried over three mentions of teeth into Melodrama as well. The themes present in her sophomore album expand in maturity in all of the best ways possible. Lorde has been obsessed with being in touch with the feelings of growing up; that’s almost solely what she’s written about. Her overnight success thrust her into the spotlight, and her self awareness comes out in her writing constantly.

Melodrama has a story arc much like Pure Heroine, only her skills are much more tuned. Her storytelling skills are growing, and you can see her authorship in more ways as the album continues. Like a playwright, she creates a play for her listeners to watch with multiple themes and ideals to gain from it. People have rightly pointed out that the album has a “party like atmosphere,” which makes sense. She references dancing in eight of the songs related to this album, including the song, “Magnets” which she released with Disclosure. I think this album has another layer of depth lying beneath it though, and the linear story of a relationship, breakup, and reemergence of self-confidence comes out in the songs. In the opener, “Green Light,” we realize right away this isn’t the Lorde that we last saw at the end of Pure Heroine. Her anger, disappointment, and maturity are palpable as she sings about the breakup of her ex-boyfriend, “She thinks you love the beach you’re such a damn liar,” as the most vocally emphasized line of the first verse. As the song grows into dance beat, and she meets someone new waiting for the relationship to kick off, the story really begins. The song, “Sober” is written right after the honeymoon phase of the relationship has died down, and Lorde is contemplating their future after the inevitable drop of the high. Both songs have this sense of anticipation of both the party and the relationship to come. The brilliant Anthony Fantano pointed out in his video review, that there isn’t really a payoff for this anticipation in the respective songs, but I think that’s an intentional choice on the part of Lorde and her producers.

After the first two songs, the story of the album really takes shape. “Homemade Dynamite” shows Lorde enjoying the nuances of the relationship, thinking the two of them can take over the world; not exactly an uncommon feeling for a couple happy with each other. In this stage of the relationship, you don’t care about the consequences like in the lyrics saying, “We’ll end up painted on the road… I guess we’re partying.” This transitions to the previously mentioned, “The Louvre,” which showcases all of Lorde’s songwriting and producing with punching lines, each hitting with a wave of power. Lines such as, “Can you hear the violence?” “They’ll hang us in the Louvre, in the back, but still the Louvre,” “I am your sweetheart psychopathic crush,” and “Blow all my friendships to sit in hell with you” along with experimental instrumentation shows the quirky side of Lorde that makes her so unique. The meditative like instrumental at the end leads straight into “Liability” a stripped, vulnerable Lorde showcasing the quick crash a relationship can have. It’s an emotional rendition for anyone suffering with low self-confidence, showing self-awareness about her fame and how it has affected her relationships. Her and her boyfriend are reaching the end of their time together.

The song, “Hard Feelings/Loveless” is a personal favorite of mine, and one of the most symbolic in the entire album. It sits right in the middle of the tracklist, and it’s the breakup moment. Sitting in the car during the breakup, Lorde talks about not wanting to get out of the car, knowing that when she steps out, it’s all over. A harsh, metallic instrumental hits at the end of the song, and I believe that’s when she steps out and all the feelings come out. They’re ugly and Lorde executes this perfectly. The “Loveless” portion of this song is attached intentionally, showcasing the defiant and angry emotions that come out after a breakup. The beat punches like increased blood pressure and the line “Bet you want to rip my heart out, bet you want to skip my calls now, well guess what, I like that,” she almost screams at a whisper. It’s a brilliantly produced song to evoke all of the breakup feelings that are present, and it leads into the second half of the album which has an almost completely different feeling. “Sober II” sits as almost an interlude. The song almost serves as Lorde breaking the fourth wall and talking to her critics, telling those who criticize her new direction and themes, “We TOLD you this was Melodrama,” referring to the title of her album. It’s an intentional reminder that Lorde’s growing up, and these new themes were thought out, part of her life, and she told them what was coming. The thematic elements in this song aren’t amiss either. There are moments in this album where it almost feels like an operatic play. “Sober II” wouldn’t feel out of place being used in the theater, and I don’t think this is unintentional. The more I listen to Lorde, the more things seem to be very intentional. Everything is thought out, so if there seems to be a meaning, it’s probably there.

Act II starts with “Writer in the Dark,” one of the most self-aware songs from an artist I’ve ever heard. The recurring hook, “Bet you rue the day you kissed a writer in the dark,” transcribes the feeling exes of musicians must feel, and it’s something that she has obviously struggled with as she’s come to terms with her overnight success. It’s also the low point of the breakup, where you’re about as low as you can be. The feelings of loneliness, doubt, and anxiety fill you as you see your own faults in the breakup. It’s a depressing song, but one that anyone that’s gone through a hard breakup can relate to. The final stage of grief, acceptance, is seen in “Supercut” where she comes to terms with the breakup. It’s a song that’s filled with a glimmer of hope, something that we haven’t seen for a while in the album, probably since the song, “The Louvre.” Five songs later she’s reminiscing on the relationship, remembering all of the good times they had but they all finish with “BUT it’s just a supercut of us,” realizing that it’s a glorified memory of their time together. The conflict comes back in during another meditative and instrumental outro, and if you haven’t figured out by now, these are there for a reason and convey feeling just as much as the meat of the song that’s filled with lyrics. The slow beat from the piano, hitting single keys combined with the drowned-out vocals in the background shows her realization that it’s over. As the beat slows and we get the underwater sounding vocals, the memories fade.

The climax of the story comes in “Liability (Reprise)” which is arguably the most powerful song that Lorde has made to date. It’s not a song that will get any radio time, but it ties the whole album together. All of the themes of self-doubt throughout the entire album come out to play during this short song, sampling “Liability” from earlier in the album. She speaks in the third person to herself, as she argues and debates with herself. “Maybe all this is the party, maybe we just do it violently,” she tries to console her doubts in resignation to her reckless mentality, blaming herself. The height of the entire song and album, comes in the emphasis of the line, “but you’re not what you thought you were.” She turns her doubts and her accusation that she’s a Liability on herself. She isn’t a liability. She casts away all of her demons.

Every story has its resolution, and “Perfect Places” is the resolution to this play that Lorde is writing. The song is a generational card, one that seeks to tie the album together as she not only has hope for the future, but revels in the “graceless nights” of being a young adult in today’s society. It’s an acceptance for who she is, any semblance of doubt is nowhere to be seen in this song, even as she screams towards the end, “What the fuck are perfect places anyway?” It has a nonchalance to it, and as the piano comes back in towards the end, you can almost see Lorde and her producers bowing as if on a stage, ending the play. The Lorde that we see at the end of the album is a stark contrast to the one we hear at the beginning of “Green Light.” She’s grown up.

Maybe I’m reading too much into it, but Lorde really seems to want to tell a story of not just a party as she references throughout the album, but a larger story about being a young adult today. That’s what she’s always been in tune with. She writes songs about her present that she tries to translate to her generation around her. Her songs are for people like her, and you can almost see it in her concert and listener demographic. Storytelling is one of Lorde’s most underappreciated qualities, and the depth she is able to add to her album by adding these reprises and creating a story is something that should be celebrated in someone so young. Her artistic vision is one of the most mature I’ve seen in a pop artist for a long time, and I believe her work does belong in somewhere like the Louvre.