The Rothko Chapel: An Artistic Experience, From a Scientist 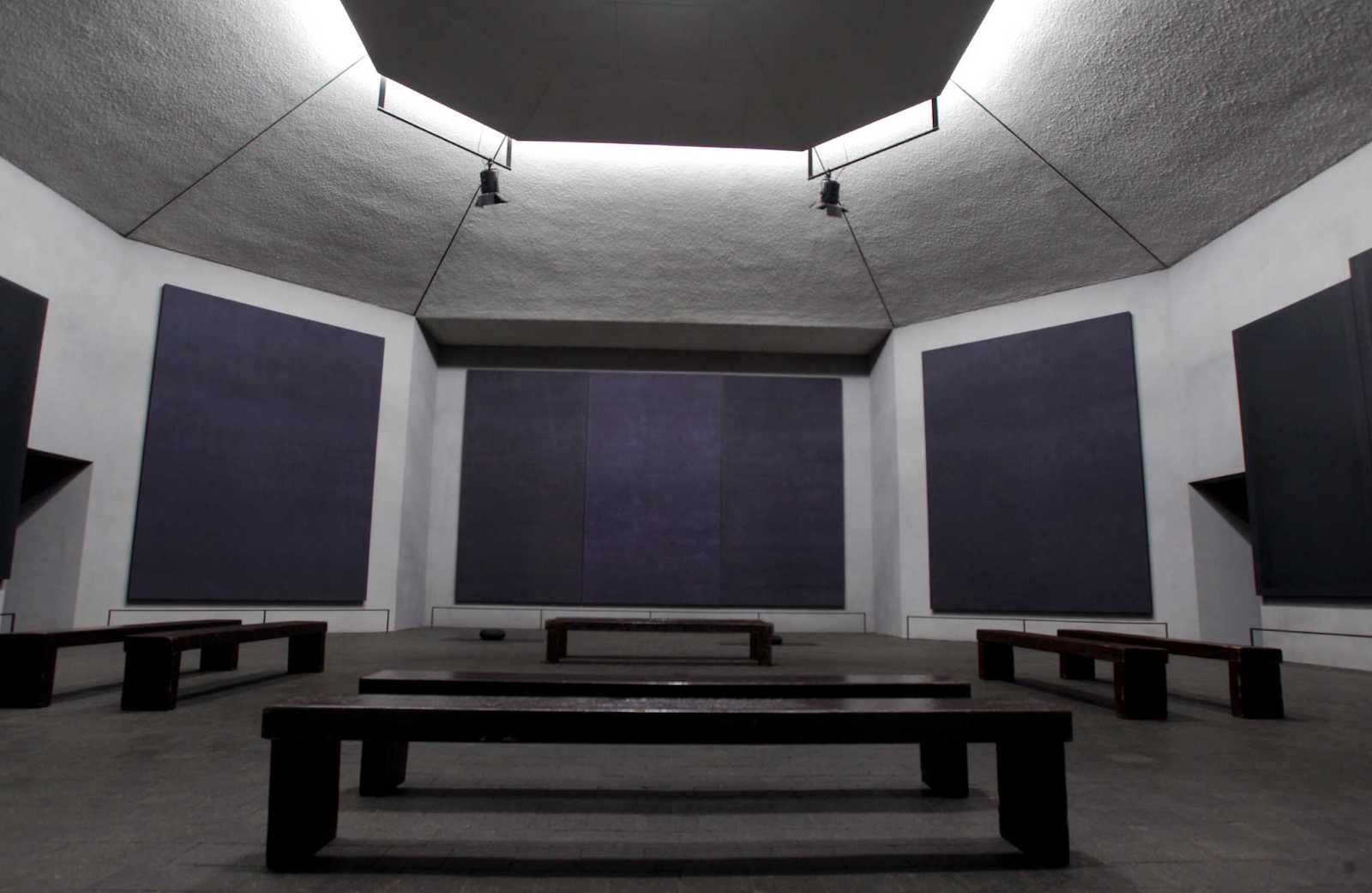 Rothko is one of those artists that gets circulated around the internet from time to time, because his works sell for an exuberant amount of money, but on the surface, it looks like someone would have to be insane to spend that amount of money on seemingly a blank canvas, or one that’s made up of just a few color sections. I had seen a couple of internet pictures of his works before, but I wasn’t introduced to Rothko until I went to the Boston Museum of Fine Arts a few months ago. Present were some of his color paintings, an orange canvas with some shades of red covering a third of the canvas. Those didn’t hit me, but when I turned the corner and saw his black paintings, there was a chord that was struck. Two side by side canvases taller than I stood (a liberal 5’9), with the darkest color I’ve ever seen in any substance. They were on loan from what I learned was the Rothko Chapel that housed the rest of the 14 black paintings. It feels weird to say that I was struck by two black canvases, but I can’t hide the fact that I was. I made it a side mission of mine to try to understand why this was art. I’m a scientist, and stereotypically scientists don’t mix with art extremely well. I’m no exception. I left that museum, and my thoughts of Rothko’s black paintings left my hippocampus shortly after. I just went to Houston though, and upon arriving I was alerted that the famed Rothko Chapel resided in the city, and my interest became piqued once again.

One thing that I didn’t realize before going to the Rothko Chapel was that it is an actual chapel, or place of prayer. My assumptions were that the building just held Rothko’s paintings, almost like it was an exhibit and Rothko was just the type of guy to call the place that held his work, something of religious importance. The idea behind the chapel is actually pretty cool. There’s a lot of politics surrounding its initial presence that I won’t go into, but once it was finished, the chapel was described as, “A Sacred Place for All,” and they meant that. When I was up in Boston, I saw a woman meditating in front of the black paintings, and I was completely confused and caught off guard. When I walked into the chapel, everything suddenly made a whole lot more sense. If you visit, don’t be surprised to see traditional Christians praying alongside Buddhists and Muslims, which in a way is kind of beautiful in and of itself. It’s one of the few places in the world that offers such a circumstance in a peaceful manner, something the rest of the world should strive for.

There’s a difference between black and a dark black, as strange as that sounds. Think about it though, the black on your phone screen looks different than the black of something like obsidian or charcoal. It’s a deeper black, a color that looks like you could fall through it if it were big enough, something that could swallow you whole. The black paintings that adorn the harsh gray stone walls of Rothko’s Chapel seem to be yelling at you with the intense softness and quietness that a dark black can give you. It’s almost as if you can step into the black of the painting. It wasn’t uncommon to see patrons standing mere inches from the blackness that Rothko represented in these paintings. When you get that close and inspect the paintings, you realize how intentional each stroke he made onto each canvas was. Each one has hints of purple or green that give the paintings depth. If he made even a single brush stroke in a different manner onto the canvas, even the least experienced art patron would be able to tell. He made these paintings to mimic “loneliness and grief,” and many people come to release their own griefs into the paintings that they may be holding onto. There’s a brilliant Houston Chronicle article from someone who did just that that I’ll link to here. The way that the paintings almost tower over you in a claustrophobic manner is the catalyst for that loneliness, and even with people in the room the feelings creep in. It’s a stunning feeling, as someone that wasn’t expecting it in any way. Even now, I still struggle to describe the intensity of the silence, the blackness, the meditation. Visiting the Rothko Chapel was by far one of the most unique things I’ve ever seen in my life.

Why does art do this do us?

It doesn’t make sense, right? There’s absolutely no reason for me to stare at a black canvas and feel small or lonely. That sounds ridiculous, but obviously there’s something that art does to the human mind. I left the Rothko chapel with the feelings that I needed to change something in my life, and I was also struck that the paintings had actually evoked something in me. Being the scientist that I am, I started to think about what could actually be going on in our brains that evoke such visceral emotional responses to art like Rothko’s. I think it’s almost intuitive why people like the Renaissance paintings, or anything depicting realism for that matter. Making something in our likeness feels good. Realistic art was another way to write down history; a picture is worth a thousand words. Reaching into abstract art delves into something a little deeper into the human psyche. Does culture influence our brains? Maybe. The Sapir-Whorf Hypothesis says so with the language you speak, and language influences culture doesn't it?

“I'm not an abstractionist. I'm not interested in the relationship of color or form or anything else. I'm interested only in expressing basic human emotions: tragedy, ecstasy, doom, and so on.” Rothko said this when asked about the strangeness of his paintings, seemingly without a subject. He famously wrote to the New York Times about his ultimate end goal: to evoke the most complex emotions in the simplest of art. The abstract movement really hit its peak with Rothko, Pollock, and other similar artists arose.

How do paintings like his and Pollock's evoke emotion in our brains? Why does abstraction bring some people to tears, while others scoff at it? There isn't much neuroscientific research on the topic, because it seems like it would be a paradox to put someone in front of an abstract painting with EEG wires and cables connected to them. Any data retrieved would feel almost artificial. The relationship between art and science is closer than most people realize though. Both disciplines have to be inherently creative; artists have their canvases, and scientists have to create their experiments for questions that haven't been asked before.

I was a skeptic of abstract art and Rothko for the longest time growing up. I didn't and still don't have an artistic mindset, so I didn't see the point. Once I visited the Museum of Fine Arts up in Boston and saw the Rothko exhibit, my mind started to change. Seeing the paintings in person immerses you in the full experience. He didn't make art for you just to look at, you are pulled within his paintings to feel every spot of paint. His paintings demand your participation in ways you don't expect. "It's not art about nothing, it's art about everything," and the pictures online and in books just don't do it justice. His art is well worth your time.